A Thrilling Day of Family Fun at Kings Dominion 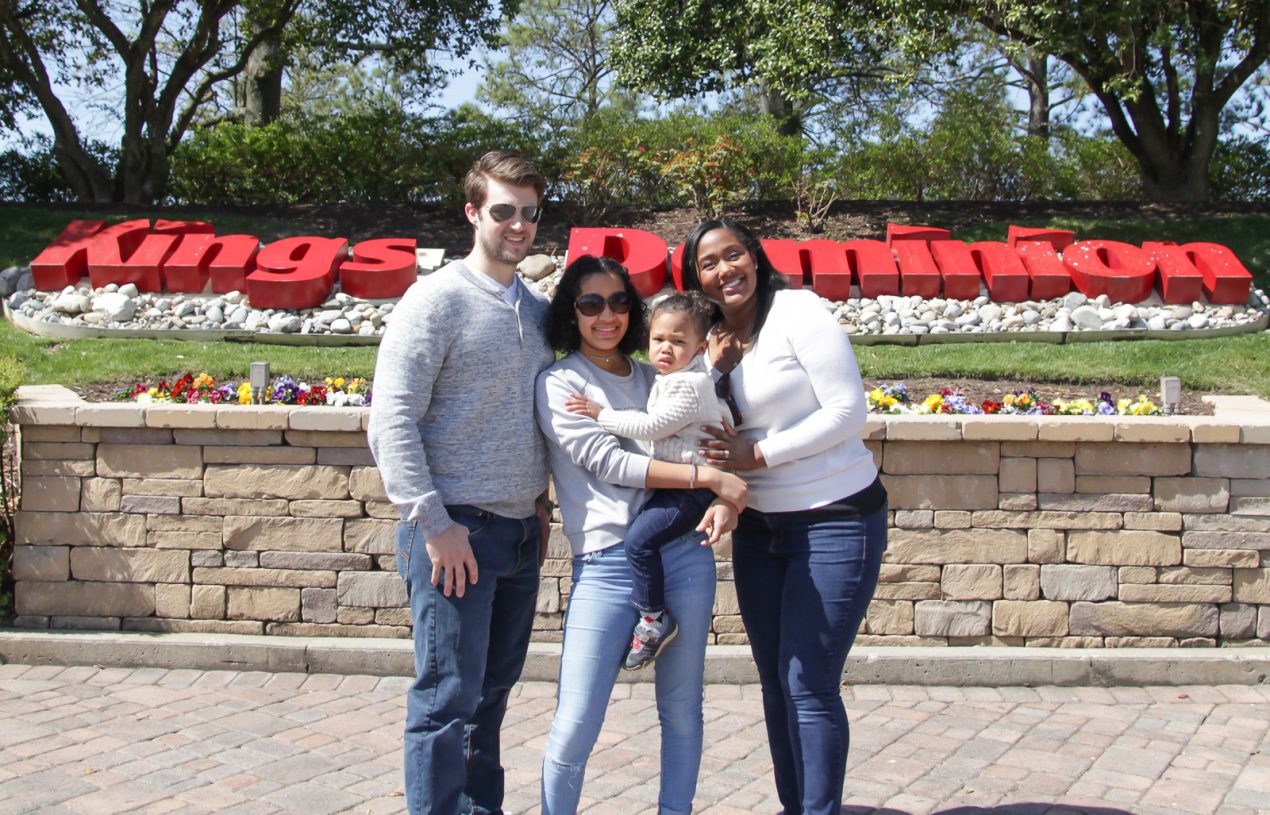 Kings Dominion sponsored The One Big Happy Life family for a day of fun and adventure at the park. All opinions are 100% my own.

I am so excited that warmer weather is finally here! After months of being cooped up in the house, we thought we would kick off spring with a trip to Kings Dominion in Virginia for a day of fun and adventure.

Having lived in Virginia for seven years before leaving for law school, I’ve spent many a summer day at Kings Dominion enjoying the rides and cooling off in Soak City, the waterpark area. In fact, here’s a throwback photo of a much younger me and Alexis during one of our many trips to the Kings Dominion when she was younger.

A DAY TRIP TO THE AMUSEMENT PARK

Kings Dominion is just under two hours outside of Washington, D.C./Maryland, which is where we live now, making it the perfect destination for a day trip. We started the day out pretty early so that we could get to the park right as it opened.

We’d printed out a park map and downloaded the phone app the night before, so we knew we’d be making a beeline for the new Twisted Timbers ride as soon as we got into the park.

We arrived at Kings Dominion at 10:30am, just thirty minutes after the park opened. Pulling up to the park, I felt this little thrill of excitement when I saw the rides off in the distance. The whole family felt it. Even Reeves got excited and started talking about how much he wanted to go on a roller coaster!

After a short detour to grab fast passes and a parent swap card for our group, we headed straight to Twisted Timbers. The coaster is brand new to the park this year and is a hybrid steel and wooden coaster. It takes you up 109 feet in the air before plummeting down a barrel roll at up to 54 miles per hour.

Alexis and Joseph rode first and absolutely loved it. But you’ll have to be sure to see their reactions for yourself in our vlog because it’s hilarious!

Next it was my turn and Joseph rode with me. I have to confess that I was pretty nervous about riding the coaster because wooden coasters can be really hit or miss. Well the Twisted Timbers was definitely a hit! The steel tracks made for a smoother ride than wooden coasters usually offer. And the barrel roll drop was breathtaking.

It’s rare for me to finish a coaster ride and want to get right back on it and do it again, but that’s exactly how Twisted Timbers made me feel. It’s definitely a new family fave.

PACING OURSELVES WITH AN EARLY LUNCH

After we took turns riding, we headed over to the Juke Box Diner right next to the ride to grab some food. We were pretty hungry by that point and were ready to put our all-day dining plans into action. We grabbed chicken tenders for Reeves and decided to try out the new Twisted Timbers burger. The kids and I also shared a Twisted Timbers shake that was the perfect mix of vanilla and chocolatey goodness.

Joseph, ever the fan of a microbrewery, grabbed a KD Brew craft beer which is specially made for Kings Dominion by a local brewery.

After lunch, we headed over to ride The Grizzly then went over to Dinosaurs Alive!, which cost an extra $5 per person. The exhibit has life-sized dinosaurs that actually move and make sounds. Reeves was completely enthralled!

It was the perfect spot for him to get out and run off some energy after lunch. Halfway through the exhibit there is a large sand pit where kids can excavate dinosaurs. I think Reeves would have happily played there all day if we’d let him.

Our next destination was Safari Village for more roller coaster riding. Reeves conked out for a nap right around 1pm, giving us two hours to ride before he would be up wanting to eat and play. On the way there, Joseph decided to ride the Drop Zone, the longest gyro height drop in the world.

While we waited, Alexis and I grabbed a funnel cake to share. Joseph decided to try out Mac Bowl, the new build-your-own mac and cheese bowl restaurant at the park.

All of the coasters in Safari Village were phenomenal! Each coaster had its own theme and atmosphere that made for a truly immersive experience.

The Anaconda takes you over and under a lake of water which really added to the thrill of the ride. I love a good underground roller coaster, so I couldn’t pass up hopping on the Flight of Fear, which is entirely in the dark. And of course we couldn’t miss The Intimidator, the tallest and fastest coaster on the east coast (and the 10th fastest in the world)!

PINT-SIZED THRILLS FOR THE WHOLE FAMILY AT PLANET SNOOPY

Reeves woke up right around 4pm  and was ready to eat and explore. Since we were already in Safari Village, we popped over to Outer Hanks to try the new crab cake sliders. They had the perfect crunch on the outside and were delicately flakey and well-seasoned on the inside. We also grabbed a basket of shrimp and french fries for Reeves.

Now that our littlest one was up, full, and ready for adventure, we headed over to Planet Snoopy, the pint-sized adventure park. Reeves had a blast! Luckily for him, he’s pretty tall for a two-year old so he made the 36” cutoff and was able to ride all but four of the rides. We each took turns riding with him. And honestly, those rides were plenty fun for us adults too!

By the time we were finishing up at Planet Snoopy, the sun was starting to set. That’s when the lights came on and the park became magical.

SEEING THE PARK WITH NEW EYES AT NIGHT

The Eiffel Tower off in the distance lit the sky up with a soft blue glow. Each ride lit up in turn, adding energy, excitement, and an air of mystery to the park. We had initially planned to leave the park just before sunset and we were so glad that we stayed and experienced the park at night.

It was almost 8pm at this point and we were feeling peckish again, so we headed back to Mac Bowl for dinner. For dessert, we snagged a s’mores funnel cake from Inferno Funnel Cakes that was the perfect between meal snack and surprisingly not overly sweet.

Just after 9:30pm–after almost 12 hours of fun–we called it a day and headed out to the car for the drive home. None of us actually wanted to leave. We had such a fun time at the park and could have easily spent several more hours there. The food and the rides were excellent and there were plenty of things to see and do beyond the big coasters.

Special thanks to Kings Dominion for sponsoring this post and hosting the One Big Happy family for the day!

We’ll send you  doses of life-changing inspo right in your inbox each week–everything you need to create the life you want.